Denies Withdraw from the International Arena, FM: Indonesia Continues to Play the Role of Middle Power 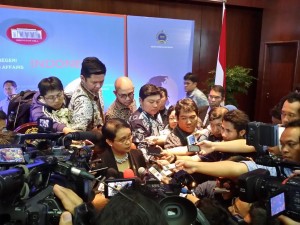 FM, Retno Marsudi answering reporters’ questions after a speech at the beginning of 2015, in Foreign Affairs Ministry office, Jakarta, Thursday (8/1)

Foreign Minister (FM) Retno Marsudi denied the presumption that the government of Indonesian to withdraw from the international community. He mentioned  that Indonesia will continue to play a role as a middle power , by placing the Association of Southeast Asian Nations (ASEAN) as a foreign policy priority.

“Indonesia will remain to contribute and take an important role in maintaining world peace and security,” Menlu said in a speech at the beginning of 2015, at Ministry of Foreign Affairs, Jakarta, Thursday (8/1).

He mentioned that Indonesia will continue actively to encourage in full the implementation of Declaration on the Conduct of Parties in the South China Sea (DOC).

Indonesia will also continue to support the Palestinian struggle to form an independent and sovereign state. In addition to representatives in Amman, Jordan, according to Menlu that Government of Indonesia will also appoint honorary consuls in Ramallah, Palestine.

Related with the effort to support the Palestinian struggle, Foreign Minister (FM) expressed regret the Government of the Republic of Indonesia on the failure of United Nations Security Council (UNSC) adopted a draft resolution on Palestine in New York, USA, December 30, 2014 ago.

Foreign Minister also said that by the end of 2015, Indonesia will start the chairmanship of Indian Ocean Rim Association (IORA) which is an international organization consisting of the countries bordering the coast in the Indian Ocean.

“Indonesia will provide assistance amounting to 20 million dollars for development in the pacific countries for the period of 2015 to 2019,” said Foreign Minister.

During the chairmanship of IORA, Foreign Minister said that Indonesia will focus and encourage cooperation in line with the interests of Indonesia as a maritime country.

Foreign Minister also said that Indonesia is the 16th largest donor to the UN peacekeeping forces. He promised, the contribution would be increased to help maintain of world peace. (*/ES)