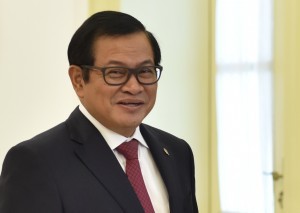 According to Cabinet Secretary Pramono Anung, the visit of the Prime Minister of Denmark Lars Løkke Rasmussen to Bogor Presidential Palace, West Java, to meet President Joko Jokowi Widodo, is his first visit to ASEAN region.

Its because Indonesia is considered as the most important country in ASEAN, Pramono Anung told the journalists after accompanying President Jokowi receives the Prime Minister of Denmark, Tuesday (28/11) afternoon.

Cabinet Secretary mentions that in the meeting, a number of cooperation opportunities have been discussed, for example cooperation in energy sector. Denmark is famous for its waste-to-energy technolgy and the use of electricity for vehicle.

Denmark has well developed these technologies and it offers a technology for waste management, Pramono Anung said.

According to him, President Jokowi pays a serious attention to the issue of waste-to-energy technology. In Indonesia, there are 7 (seven) cities that become the pilot project for this technology. If this technology can be used, then it can solve the problem of waste. Even, the waste can be used for energy. However, Pramono Anung admits the cost is still relatively high compared to other energy. He also adds that those cities, in particular Surabaya dan Bandung, are actually ready to implement the waste-to-energy technology.

Our waste can be used for energy and it is not difficult to implement the technology, the Cabinet Secretary further said. (RMI/OJI/ES) (MMB/YM/Naster)