Despite Improving Economy, No Room for Complacency: President Jokowi 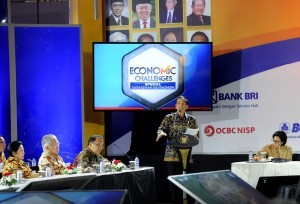 Although the International Monetary Fund (IMF) considers that Indonesias economy continues to improve thanks to the countrys macroeconomic policies and structural reforms, President Joko Jokowi Widodo said there should be no room for complacency as the IMF also warns against possible economic risks due to external factors.

(Some of those external factors) include Fed rate hike, as well as the slowdown of Chinas economy, President Jokowi said in his keynote speech at the Forum of 100 Indonesian Economists at Fairmont Hotel, Jakarta, Saturday (6/12).

President Jokowi added that the key to address those challenges is to respond with optimism because almost all countries are also facing the same challenges.

According to President Jokowi, every time he meets with other world leaders, the issues they discuss are almost the same: negative economic growth, difficulty to find investors, and finding inflows.

The President went on to say that it is important for Indonesia to attract as many as investors to Indonesia; thus, the President has given a clear instruction to the economic team in his administration, especially to Head of the Investment Coordinating Board (BPKM), that the investment target must be met whatever it takes.

For example, our target next year is around Rp670 trillion. Once we have set the target, it must be pursued, whatever it takes. In 2018, our target is around Rp840 trillion, and we hope that later on, investment value can be at least 45 percent of our Gross Domestic Product, so it will give a good economic trigger, President Jokowi said.

President Jokowi went on to say that some of the aspects that must be given attention to meet the investment target is the substitution of imported goods and mega projects that must be seriously implemented, for example those worth US$3 billion, US$6 billion, or US$15 billion.

Thus, those measures will give a good economic trigger for our economic growth, the President said.

President Jokowi further said that unlike in the past, it is not easy to earn trust from and give certainties to investors these days;  yet, the President believes that with changes that have been made, investors will make their investment in Indonesia, for example in sectors such as petro-oleochemical,  steel, oil and gas, or power plants.

I suppose that the last one is investment in power plants. In early 2017, we hope it will enter the financial closing phase so the inflows can be expected in the first semester of 2017, the President said.