Despite Sales Decreases by 21%, Indonesian Motorcycle Industry Still Ranks Third in the World 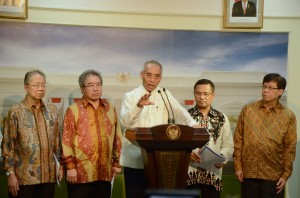 Amidst economic slowdown in Indonesia and several countries, the estimated number of motorcycle produced by the Indonesian Motorcycle Industry Association’s (AISI) reaches 6.3 million units or lower by 7-9 million units as compared to the production  in 2014.

AISI Chairperson Gunadi Sindhuwinata explained that motorcycle market was currently slowing  down by 21% as compared to that of the previous year.

It is the number that will support our economic scale and competitiveness, Gunadi said to the reporters after, along with managers of AISI and Gaikindo, were received by President Joko Widodo at the Merdeka Palace, Jakarta, on Tuesday (13/10).

Gunadi added that with the production capacity of 9.6 million units, Indonesian motorcycle industry has employed 2 million workers  from upstream industries to downstream industries, including those who worked in industrial workshop, financing and the ones who are directly involved in the production process.

With these  2 million people, we can reach 85% of the production capacity. As for the remaining 15% on four-wheel drive as well, the rest lies on special components including steel, iron and plastics raw materials, as well as other raw material components, Gunadi said.

Gunadi added that the contribution of motorcycle industry to the State is in the form of taxes, either regional or central taxes, and the amount is about Rp 14 trillions.

Furthermore, from 6.3 millions units motorcycles that were recorded in 2014, 41,000 units have been exported and the export this year is estimated to increase by 440%.

We estimate it and ensure the President that our export volumes will reach 1,000% in 2019, Gunadi said.

Gunadi went on to say that if in the beginning, motorcycle market is only in developing countries  and was still limited, but now there is a trend to use small motorcycle due to its rational use, instead of the  250 cc of large motorcycle.

Moreover, if developed countries could spend USD 1,000 to buy motorcycle, it will mean nothing for them. Currrently, the development of motorcycle market in Europe, for example in Germany, the UK, Netherlands and other countries is pretty satisfying. Our industry is still also aiming to export to Japan and other Pacific countries, Gunadi added.

Gunadi believes that in the next 5-10 years, 100-150 cc motorcyles will be the favorite product because in Indonesia, affordable motorcycles will move the economic activities. Thus, he  also believes that the market would continue to grow.