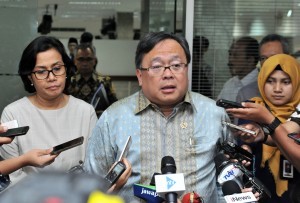 National Development Planning Minister Bambang Brodjonegoro delivers a statement to reporters after a Plenary Meeting of the National Committee for Sharia Finance on Monday (5/2), at the Presidential Office, Jakarta

Several Priority Actions Plans (Quick Wins) are to be intensified as a follow up to a Plenary Meeting of the National Committee for Sharia Finance, including the development of halal or sharia industries and real sectors.

Because Indonesia is a market of halal products. Surprisingly, the world’s largest Muslim fashion exporter is China, Indonesia is not even in the top 5, Minister of National Development Planning (PPN)/Head of National Development Planning Agency (Bappenas) Bambang Brodjonegoro said after a Plenary Meeting of the National Committee for Sharia Finance on Monday (5/2), at the Presidential Office, Jakarta.

To date, the Minister added, Indonesia ranked fourth in the Halal Travel Indicator, and ranked tenth in halal cosmetic market.

Therefore, the President has instructed to set a roadmap for the development of halal real sectors and manufacturing industry, Bambang said while adding that further provisions will be discussed later in order to provide business certainty.

The second point in that meeting is regarding sharia finance. Indonesia needs to create large-scale sharia banks that will also have wider coverage in banking activities and become the main base of State-owned Enterprises (BUMN) in cooperation with private sector.

The third one is about the strengthening in the collection of religious social funds, such as zakat (a form of alms-giving treated in Islam as a religious obligation) funds, waqf (an endowment made by a Muslim to a religious, educational, or charitable cause) funds. Micro waqf bank will be developed so that it will help to reduce poverty in several regions given that this small scale credit is expected to help people living in Islamic Boarding School. Zakat also serves as a way to alleviate poverty in Indonesia, Bambang firmly said.

Regarding zakat collection for civil servant, the Minister asserted that his side is now looking for the best solution.

There are indeed a number of institutions which have implemented the program including the Ministry of Religious Affairs. However, if it is going to be widely implemented, we should be aware of the base regulation, Bambang added.

Also on that occasion, Bambang gave a statement about the plan to merge all sharia banks in Indonesia. The Minister said that there is a plan to merge state-owned sharia banks but the Government is now seeking the most optimal form of merger. The most important thing is the result that we can establish large-scale sharia banks. (FID/JAY/EN) (RAS/ MUR/MMB/YM/Naster)