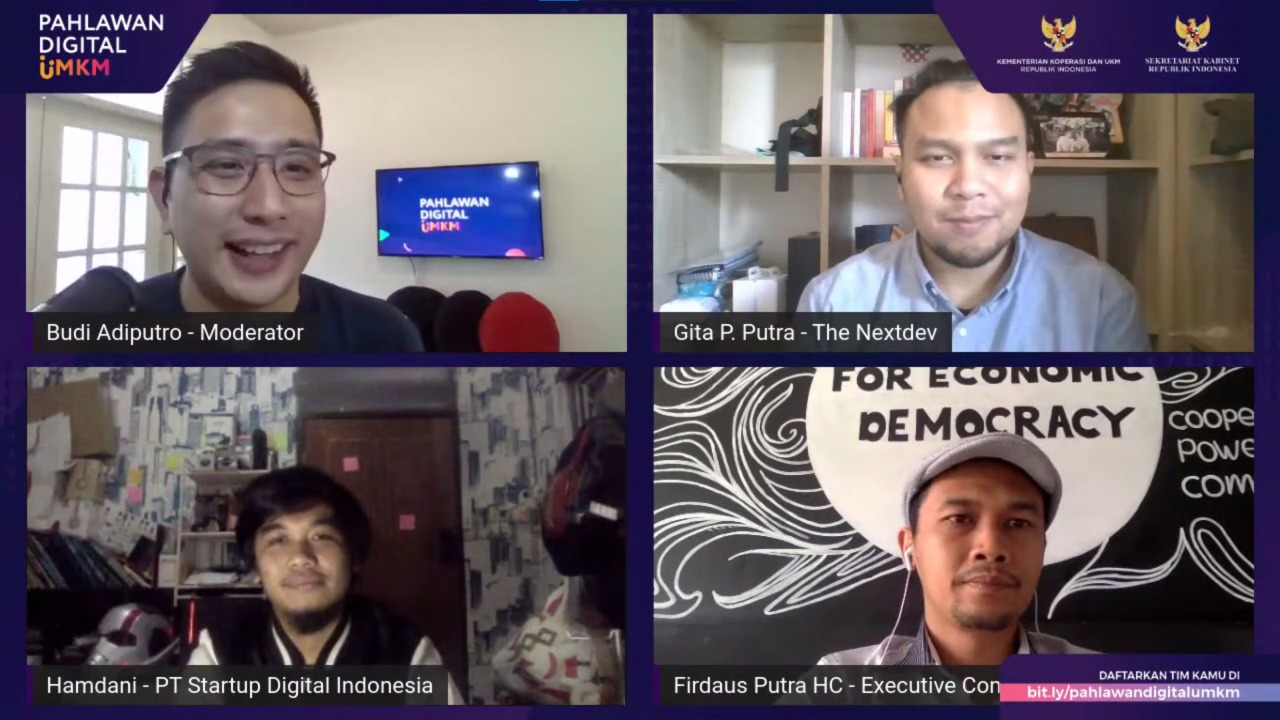 The fourth series of ‘Digital Heroes’ talk show. (Photo by: Ministry of Cooperatives and Small and Medium-sized Enterprises PR)

The fourth series of a workshop and talk show called “Pahlawan Digital UMKM (MSMEs’ Digital Heroes)” which was initiated by Presidential Staffer Putri Tanjung in collaboration with Ministry of Cooperatives and Small and Medium-sized Enterprises which adopted a theme “Developing Indonesia through Digital Innovator Ecosystem” was held on Saturday (5/9).

The show was broadcasted through YouTube and Instagram accounts @KemenkopUKM and @pahlawandigitalumkm featured speakers from three startup companies, The Nextdev, Indonesian Consortium for Cooperative Innovation (ICCI), and Startup Digital Indonesia.

Lead of Innovation and Partnership The Nextdev Gita Pratama Putra said that his company has been building ecosystem for digital innovators since 2015 by assisting startup companies to level up. The Nextdev has been working on various issues, such as digital competitiveness, digital ecosystem, digital platform & facilites, and international recognition.

“Indonesia has many startup companies but they have not made extensive use of digital technology,” he said adding that The Nextdev helps entrepreneurs, startup companies, and Micro, Small, and Medium-sized Enterprises (MSMEs) to have connections with each other that will help them to level up. The Nextdev also help them to gain national and international recognitions.

According to him, an ecosystem where all startup companies can have similar objective and synergy is really needed right now. “We need the ecosystem that open opportunities and wider access to collaborate,” he added.

Moreover, he added, the Government’s regulations will also help startup companies to live in the ecosystem. “If the ecosystem can run well, I believe that our economic growth can soar after recession,” he firmly said.

In the meantime, Firdaus Putra, Executive Committee Indonesian Consortium for Cooperative Innovation (ICCI) said that the Government’s roles is not the only factor that determines connections among startup companies. The other issues are mentality of the entrepreneurs who are not ready to compete.

“Thus, they keep thinking that they have nothing to lose. It’s good if the company can compete, but if it doesn’t, just let it be. It’s all about the attitude,” Firdaus said adding that Indonesian young entrepreneurs have different attitude than that of other countries who try their best to develop their companies.

He went on to say that if they have problem with technology, they can just learn, but if the issue is on their mentality, it must be nurtured. Thus, our young entrepreneurs will do their utmost to develop their companies.

On the same occasion, Hamdani, CEO PT Startup Digital Indonesia, said that the main problem in developing startup company in an integrated ecosystem is that there is no line that connect all. Therefore, active role of the Government is needed to connect that line; connect the investor, joint venture, and startup companies.

For the record, as a token of appreciation to those dubbed as ‘Digital Heroes’ for Micro, Small, and Medium-sized Enterprises (MSMEs) and as a medium to create young innovators, Presidential Staffer Putri Tanjung in collaboration with Ministry of Cooperatives and Small and Medium-sized Enterprises and Cabinet Secretariat held a workshop and talk show called “Pahlawan Digital UMKM (MSMEs’ Digital Heroes)”.

‘Digital Heroes’ program also aims to introduce and support many other technology startup companies and social movement that support the digitalization of MSMEs. In addition, the program also provides trainings to young innovators to improve their quality, and appreciates innovators who have been helping the MSMEs.

According to Putri, the youth plays important role and contribute to the development due to their tremendous spirit. She invited young innovators to join the ‘MSMEs’ Digital Heroes’. The public can access the update of the program on Instagram @pahlawandigitalumkm, @kemenkopukm, and @putri_tanjung. (Ministry of Cooperatives and Small and Medium-sized Enterprises PR/SKP Putri Tanjung/EN)