Diplomat Must Fight for Countrys Interest 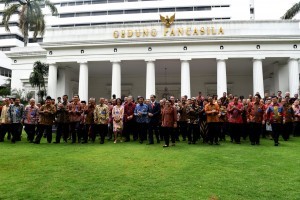 Today, being a diplomat is not easy because diplomat bears difficult tasks as many uncertainties persist in the world.

Various parts of the world are at wars, conflicts, humanitarian crisis that resulted in million of refugees. Cross-border crime, terrorism, human trafficking, illicit drugs trafficking threatened not only Indonesia but all countries, President Jokowi said in a remarks during a Working Meeting of the Representatives of the Government of Indonesia with the Ministry of Foreign Affairs, at Pancasila Building, Ministry of Foreign Affairs Complex, Jakarta, on Monday (12/2).

The President also asserted that economic competition is fiercer in which every country wants to be the winner. Moreover, an increase of protectionism is implemented through tariff and non-tariff barriers in numerous fields.

Therefore, new diplomatic approaches should be adjusted to meet the current challenges.

On that occasion, President Jokowi also mentioned that in the past three years, Indonesias diplomacy on peace and humanity has been applauded by several world leaders.

For that reason, President Jokowi instructed Minister of Foreign Affairs and all representatives of the Republic of Indonesia to continue contributing to world peace and humanity.

Indonesia, as the country with the largest Muslim population that is moderate and plural, and the third largest democracy in the world, bears huge responsibility to be part of the solution to global problems, the President firmly said.