Dipo: Thank You To All Cabinet Secretariat Ranks and Indonesian Military 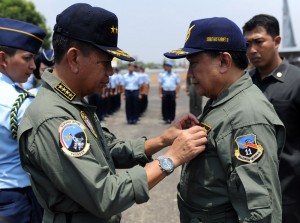 Cabinet Secretary Dipo Alam could not hide his happiness when the Air Chief Marshal, Ida Bagus Putu Dunia, pinned the Aviator of Honorary Wing on his right chess at the ceremony in Hasanudin Airport, Makassar, on Tuesday afternoon.

By the embedding, he is not only being the honorary aviator but also becoming the honorary citizen of Indonesian Military. This honor was achieved by Cabinet Secretary Dipo Alam after he flew the Sukhoi SU-30MK2 Jet Fighters for around 30 minutes in the air area of Makassar and Jeneponto earlier.

Alhamdulillah, I have done the maneuver in the air. All was okay, thank you Air Force Military that has given the opportunity to me to fly the Sukhoi Jet Fighter, Dipo Alam said it with beaming face.

He explained that this awarding of the Aviator of Honorary Wing related to all dedications and contributions of Cabinet Secretariat ranks for the development of Air Force Indonesian Military, it is the part of the 69th Anniversary of the Indonesian Military.