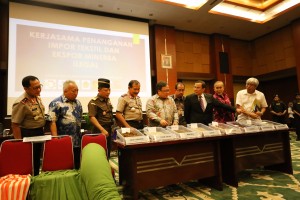 Minister of Finance Bambang Brodjonegoro accompanied by Indonesia National Polices Chief and Director General of Customs and Excise showed the evidence of illegal import of textile and illegal export of mineral and coal, in Jakarta, on Monday (9/11)

Minister of Finance Bambang P. S. Brodjonegoro explained that the foiling of this illegal textile import was the result of the investigation of a similar case that happened last month. On 2 October 2015, Main Service Office of Customs and Excise (KPU BC) of Tanjung Priok as well as West Java Regional Office of Customs and Excise cooperating with the police officers succesfully thwarted illegal textile import from China that caused the State suffers Rp 2.3 billion in financial losses.

Four 40 ft-containers of illegal textile and textile products imports from China is the result of the follow-up of the previous case, that was directly observed by the President, the Minister said in a press conference at the Main Office of the Ministry of Finance, Jakarta, on Monday (9/11).

This illegal textile import was carried out by PT KYIH, a company that uses the facility of the Bonded Zone, that is suspected committing customs offences i.e. unloading import goods that are under supervison of the customs in a place other than the appointed destination.

The State has the potential to loss Rp 3.3. billion due to this import, particularly from unpaid import duty, the Minister explained.

This mineral and coal come from various areas in Indonesia, such as Maluku, Sulawesi, West Java, Central Java, and East Java, the Minister stated. Actually, the Minister added, these minerals will be exported to various countries, such as the Netherlands, Taiwan, Korea, Hongkong, India, Singapore, and Thailand. This illegal export is carried out by 21 companies that are listed as PT as well as CV.

The mode of operation use in this crime was by stating the amount and types of goods that are different with the customs notice and giving fake customs documents.

Moreover, the officer of customs and excise suspected that the mineral commodity of cinnabar ore is from illegal mining because the Ministry of Energy and Mineral Resources has never been issued the mining permit for this commodity.

The potential of State losses due to illegal mineral and coal export is predicted to achieve more than Rp 73 billion. Furthermore, it also cause immaterial losses such as the damage of natural resources and environmental pollution due to illegal mining, the Minister explained while adding that this illegal export disrupts the downstreaming process of mineral and coal that is promoting by the Government. (MMB/YM/Naster)