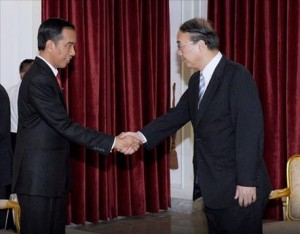 President Jokowi welcomed the visit of the Special Envoy of the Japanese PM Shinzo Abe, Hiroto Izumi, at the State Palace, Jakarta, Wednesday (26/8).

According to the President Jokowi, the meeting discussed efforts to increase economic cooperation between the two countries, including the development of fast train from Jakarta to Bandung.

“For the fast train, government has formed an independent assessors team and consultant who will provide assessment and comprehensive advice to the government,” President Jokowi said through facebook fan page some time ago.

President explained, besides with Japan, cooperation with other countries will continue to be improved to accelerate investments. “This is to boost economic growth and welfare of the people,” he said.

Through his personal twitter account @jokowi that uploaded a few moments ago, President Jokowi conveying his gratitude for Japan’s intention of improving the economic cooperation.

Earlier, the Japanese government delegation led by Special Envoy of Prime Minister Shinzo, Hiroto Izumi, has met with the Coordinating Minister for maritime and Resources Rizal Ramli, in maritime Kemenko office, Wednesday (26/8) afternoon, to discuss the prospects of fast trains from Jakarta to Bandung along the 200 kilometer could be reached within 36 minutes.

On that occasion, Hiroto Izumi promised to give flexibility to Indonesia to operate the fast train, if it can be trusted to be the winner of the mega project.   (*/ES)