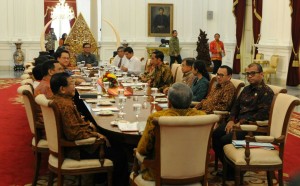 The atmosphere of the consultation meeting between President Jokowi with the leaders of the DPD-RI, at the State Palace, Jakarta, Monday (2/2)

President Joko Widodo (Jokowi) accompanied by Vice President Jusuf Kalla (JK) held a consultation meeting with leaders of the Regional Representative Council of the Republic of Indonesia (DPD-RI), at the State Palace, Jakarta, Monday (2/2). The consultation meeting of DPD leaders and President Jokowi is the first time since leaders of the DPD-RI 2014-2019 period, inaugurated last October.

DPD Chairman Irman Gusman said, consultation meetings held to discuss the strategic agendas of both institutions, in an effort to smooth the central and local government relations, Draft Law, Plus Special Autonomy for Papua and West Papua.

Moreover, Irman Gusman said, one-hour meeting also discussed the laws of the village, the acceleration of infrastructure, construction of the smelter PT. Freeport Indonesia, as well as a plan to amend the Constitution(UUD) 45, in an effort to strengthen the presidential system.

“Council will hear the views and inputs of President Jokowi,” Irman Gusman said.

Particularly relevant to the smelter, DPD will propose to the President that the smelter PT. Freeport Indonesia built in the Papua Region, in accordance with the aspirations of Papuan People’s Assembly (MRP) and the Governor of Papua

“We want the development of Papua accelerated by building a smelter in Papua, accordance with the wishes of Papua delegation to the Council,” Irman said.