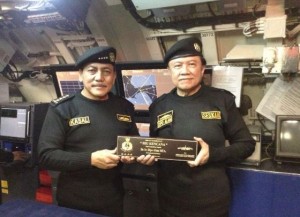 “Alhamdulillah, not as hard as flies using Sukhoi”, said Seskab Dipo Alam after a dive at a depth of 22 meters with a ship weighing 1,300 tons which was made in Germany.

Seskab Dipo Alam who accompanied by Madame Niniek Dipo Alam, expresses gratitude for receiving two honorary award, the Honorary Wing Airmen and Honorary Brevet. “Thank you for the support from all employees of Cabinet Secretariat”, he said.

After a dive with the ship which was built in 1978, Seskab hopes the government soon enhance the modernizing and adds more submarine. “Currently we have few submarine and all are old. We need at least 40 submarines to guard the border of Indonesian territory”, he said.

Grateful af President Susilo Bambang Yudhoyono’s leadership in modernizing and adds the Alutsista of TNI, and hopes the next President would continue the program. (Humas Setkab/ES)(Ifp)