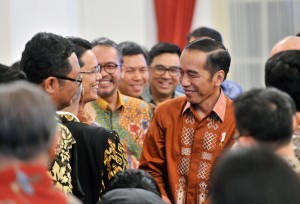 President Jokowi converses with the attendees at the Opening of the Meeting of Church Leaders and Rector/Head of the Indonesian Christian College, in the State Palace, Jakarta, Wednesday (24/10). (Photo by: Jay/Public Relations).

Indonesia has solved the nations problems and rated A and other countries are amazed to see Indonesias achievement, President Joko Jokowi Widodo has said.

Indonesias population is now 260 million and is blessed by God with diversity, differences, and colors, President Jokowi said in his speech at the Opening of the Meeting of Church Leaders and Rector/Head of the Indonesian Christian College, in the State Palace, Jakarta, Wednesday (24/10).

However, because of the regional and national election that actually occurs once in five years, according to President Jokowi, various bad methods are used. The methods such as divide and rule and mocking each other are used to obtain a seat of power so there will be another problem of differences are surfaced, he said.

For this reason, the President said that he has often conveyed to the people to exercise their voting rights based on what they offer on their program, their track records and achievements. Not by slandering and denouncing each other and spreading hoaxes, it will make us backwards. It doesnt make us mature in democracy, President Jokowi said.

According to President Jokowi, the participation of the religious and community leaders are needed to continue to inform their people so that they are well aware that Indonesia is a large country with big differences and diversities.

Therefore, let us take care and maintain the unity, harmony, and brotherhood among us together. In fact we are indeed different, the President concluded.

Also present on the occasion were Minister of Religious Affairs Lukman Hakim Saifuddin, Minister of Research, Education and Higher Education M. Nasir, Chairwoman of the Indonesian Communion of Churches (PGI) Henriette Hutabarat-Lebang, and a number of church and synod leaders and  from all over Indonesia and all rectors and heads of Christian colleges from all over the country. (FID/JAY/ES) (GWH/EP/Naster)