Do Not Worry About 21,000 Chinese Migrant Workers, President Jokowi Says 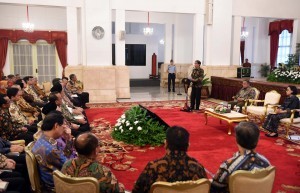 President Jokowi delivers a remarks during a Silaturahmi (friendly social call) of Sharia Financial Stakeholders in an Octennial Celebration of Government Securities (SBN), on Friday (23/12)

President Joko Jokowi Widodo reiterated that the number of Chinese workers in Indonesia is only around 21,000 workers, as opposed to 10 or 20 million workers as it is rumored lately.

In fact, the number of Japanese and South Korean workers is higher, President Jokowi said during a gathering with stakeholders of sharia finance on Friday (23/12) at the State Palace, Jakarta.

Those countries do not make a fuss about it, but why do we act as if the country is being hit by a hurricane? President Jokowi said.

The presence of those Chinese workers shows that there are investments and there are some sectors that have not been mastered by Indonesian workers, so Chinese technicians are needed to do the works, the President further said.

How would they move to the place that pays less wage? It does not make sense. If Indonesians work abroad, they will be paid 5 to 10 times higher than they obtain in Indonesia. Unless, they do not want to work abroad because all of their salaries will be spent on transportation and accommodation. That is the logic, the President said.

President Jokowi also felt the urge to clarify the rumor because if he does not, the number will continue to increase as the news already mentions that there are 21 million Chinese workers in Indonesia.

Hoaxes are consuming our energies. The energies should be used for productive activities. Do not spend it to spread such hoaxes, the President said. (RMI/ES) (RAS/EP/YM/Naster)