Do Your Best For The Country, President Jokowi Tells Para Games Athletes 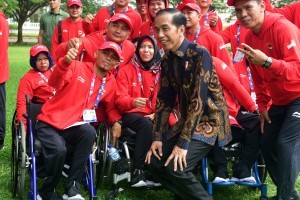 President Joko Jokowi Widodo on Tuesday (2/10) at the Merdeka Palace led a send-off ceremony for Indonesian athletes and official teams that will compete in 2018 Asian Para Games.

On that occasion, the President told the athletes to fight and work hard to give the best results at the Games, which is to be held on 6-13 October 2018.

I can see all of you have practiced very hard during training session. I hope you can do your best for the glory of the country, the President said.

President Jokowi went on say that Indonesias target is to be in top 8 with 16 gold medals and expressed confidence that Indonesian athletes will be able to deliver at the Games. All Indonesian people want to witness the countrys victory and see our national flag raised and the national anthem sung in every match, the President said.

On that occasion, President Jokowi also asked athletes to take a moment of silence to pray for the victims of the earthquake and tsunami in Palu, Donggala and Lombok.

In the meantime, Coordinating Minister for Human Development and Culture Puan Maharani reported that the Indonesian contingent for 2018 Asian Para Games constitute 425 personnel, including 300 athletes and 125 officials.