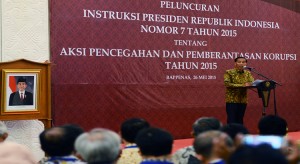 President Jokowi gave a speech at the launch of Presidential Decree No. 7/2015, in Bappenas Building, Jakarta, Tuesday (26/5)

President Joko Widodo (Jokowi) asked for the action to prevent and eradicate corruption as stated in Presidential Instruction (Instruction) No. 7 of 2015 performed as well as possible, not just a formality.

“This is my promise yesterday, I want to come here is not just a formality, but indeed that there will be the action which is performed, both with regard to reform of the licensing service in ministries and agencies, and in the government who is also the focus of this Instruction,” President Jokowi said when launching the Presidential Instruction No. 7 of 2015 on the Actions of Prevention and Combating of Corruption, Bappenas Building, Jakarta, Tuesday (26/5) noon.

President assert that he doest want to hear there are still illegal fees (Pungli), which permits that should be done 1 day or two days still to be 6 months, 8 months. That should have 1 month still to 4 years, 5 years. “It should be eliminated,” President Jokowi said.

The President also asked the Minister of PPN/Head of Bappenas that together with the Head of BPKP to continuously monitor and evaluate not only the output but also the outcome.

“In this case, KPK can also provide input to the actions undertaken by ministries/agencies, local governments, so that the Instruction is actually running and optimally performed, and the positive impact felt by the public,” Jokowi said.

Previously in his speech, President Jokowi argues that in achieving of the good governance and corruption-free the preventive action is as important as enforcement actions. He said, to build a good system, establish an effective system, will significantly reduce the corruption.     He mentioned that a good system that can be e-budgeting, e-government, e-purschasing, e catalog, e-auditing, and tax.

“I just imagine that the system of e-catalogs and e-purchasing has been running, I’ve seen the resulting efficiency of approximately 10 percent, this is not a little money. If handled professionally with a good supervision system, in LKPP will occur 20 to 30 percent efficiency. My estimate could be up to 30%, “said Jokowi as he mentioned, if calculated from Rp 2,560 trillion, 30 percent was not a little money.

Therefore, further President Jokowi, he often expressed to build the system, because it will be a big fence, a large wall in the prevention of corruption.