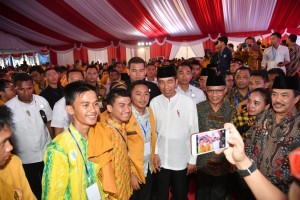 President Jokowi pose for a group photo with the 21st Congress of the Muhammadiyah Student Association (IPM) of Muhammadiyah University of Sidoarjo attendees, Monday (19/11). (Photo by: BPMI)

President Joko Jokowi Widodo told members of the Muhammadiyah Student Association (IPM) to be able to respond to the global changes to face the intense global competition.

With our youth, especially the IPM cadres, I believe we dont have to fear to compete with other countries, President Jokowi said at the 21st Congress of the IPM of Muhammadiyah University of Sidoarjo, Sidoarjo Regency, East Java, Monday (19/11).

According to the President, quality and excellence of Indonesian youth is on par with that of youth from foreign countries, as evidenced by the victory gained in a number of international level science championships/science Olympiad by Indonesian youth.

The same things also occurred recently in the competition of technology companies. There are seven unicorn startups in the ASEAN member countries owned by our young people. Four of them are from Indonesia, such as Nadiem Makarim of ride-hailing app Go-Jek and Zaki of e-commerce platform Bukalapak, President Jokowi said, adding that Indonesian youth should not feel inferior.

On the contrary, the President continued, Indonesian youth must be able to bring changes in progress for Indonesia.

Citing the calculations of the Mckinsey Global Institute, President Jokowi explained that Indonesia is predicted to be amongst top four largest economies by 2045. That era is your turn, he said.

As quoted in techsauce.co, the four unicorn startups from Indonesia are GoJek (founded by Nadiem Makarim), Tokopedia (founded by William Tanuwijaya), Traveloka (founded by Ferry Unardi), and Bukalapak (founded by Achmad Zaky). (BPMI/EN)