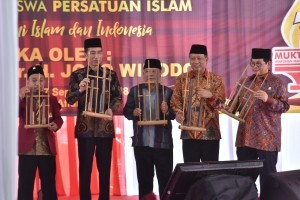 President Jokowi once again reminded that Indonesia is a big country with the worlds largest Muslim populations and is home for 263 million people.

Everyone surely wants to have comfortable life and great jobs. And, that is our task to realize their wishes, the President said in his remarks at the opening of the 9th Muslim Student Union (Hima Persis) Conference, at the Unions Ustman Bin Affan Islamic Boarding School, Cipayung, East Jakarta.

President Jokowi added that Indonesian people live in 17,000 islands spreading throughout the archipelago; Therefore, he called on people to leave the Java-sentris paradigm as Indonesia consists of 17,000 islands, 514 regencies/cities, and 34 provinces.

I always stress this thing everywhere I go because some people are still trapped in the Java-sentris paradigm. They only think about Java Island although Indonesia is a big country that extends from Sabang to Merauke, from Miangas to Rote Island, the President said.

The President added that this country is blessed by the God with differences and diversities, including differences in religion, ethnicity, tradition, custom, language, and many others.

This is a blessing from God to us that must be cherished because the main assets of this country are unity, harmony, solidarity, and brotherhood, the President added.

For that reason, President Jokowi always remind the people to always mantain ukhuwah Islamiyah (brotherhood among Muslims) and ukhuwah wathoniyah (brotherhood among fellow countrymen). We must maintain these two things. We must not sacrifice long-standing harmony and synergy among Indonesians only because democratic fiesta that is only held once every 5 years, the President said.

President Jokowi went on to say that during the Bogor Summit on Wasatiyyat Islam last May, ulema (Islamic scholars) from friendly countries applauded Indonesias community. Grand Sheikh of Al-Azhar said that he respects Indonesia because we can maintain harmony, unity, and brotherhood despite our differences, the President added.

Therefore, President Jokowi called on all people to maintain unity, brotherhood, harmony, ukhuwah, to bring stability and prosperity to the people.

At the beginning of his remarks, President Jokowi responded to the request made by the Persatuan Islam (Persis) Muslim group to build low-cost apartment buildings and the Persis University.

There are proposals for three low-cost apartments submitted by the Persis and I already told the Cabinet Secretary that the Government approves it. God willing, Inshaallah, the construction will begin immediately; some of which will be developed this year, and the rest will be done next year, he added to applause from the audience.

As for the Persis University, President Jokowi said he will announce the decision soon.

So, after all requirements (to establish the university) are submitted to Ministry of Research, Technology and Higher Education, I will follow it up. The sooner we submit the requirements, the sooner the university permit is issued, President Jokowi said, adding that education and human resources development are crucial for the country in order to compete with other countries.