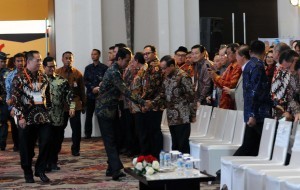 Although the condition of politics in Indonesia heats up, President Joko Jokowi thinks that it is normal. This condition usually takes place prior to or during the campaign period of Regional Elections (Pilkada), either Governor Elections (Pilgub), Regent and Deputy Regent Elections, or Mayor and Deputy Mayor Elections.

It is always like this. However, this time it is quite special, particularly in regards to Governor Elections in Jakarta. Governor, Regent, and Mayor Elections are also held at 101 provinces, regencies, and cities but Jakarta always be in the spotlight, the President said when delivering his remarks at the Opening of the 25th National Deliberation of Real Estate Indonesia (REI), at Grand Ballroom Fairmont Hotel, Jakarta, on Tuesday (29/11) morning.

Regarding national consolidation, the President asserted that it should be carried out so that Indonesia would be stronger, more resilient, and more mature in politics.

Therefore, President Jokowi invited business sector, in particular REI, to focus on working as well as executing development programs so that all Indonesian people will have decent houses.