Draft Budget 2016: President Jokowi Asks the Subsidies of Fuel, Electrical, and Non-Energy Should be Recalculated 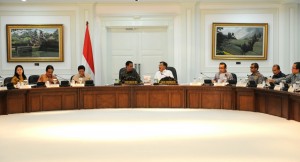 In the introduction, the President instructed the basic macroeconomic assumptions follow the latest economic developments. “Later, we want that everything is installed realistically,” he said.

As for the matter of electricity subsidies, fuel subsidies, and non-energy, President Jokowi requesting it should be recalculated so that it can precisely on target.

While the transfer of funds to the region and the funds allocated to the village, the President instructed the Minister should be greater than the expenditure in ministries / agencies.

“It is also cautious in terms of supervision, on the side of the controlling in the field should be carried out continuously,” President Jokowi asked.

Related to the distribution of social assistance in 2016, the president expects to be able to focus more on education, health, and on poverty reduction.