Drug-Free Millennials Should Be Proud of Themselves: Cabinet Secretary 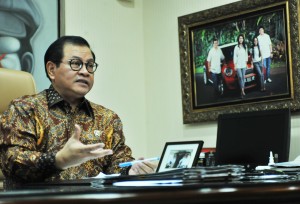 Cabinet Secretary speaks in a special interview in his office at Building III of the Ministry of State Secretariat, Jakarta, Tuesday (25/6). (Photo by: Rahmat/PR)

Drug abuse has become our common enemy and no one will be a successful person by becoming a drug addict, according to Cabinet Secretary Pramono Anung.

He added that those who are not drug users must also be proud of themselves as they can live a healthier life.

“The millennials should stay away from drugs. They should be proud of themselves and be grateful for not becoming drug users,” Pramono said during an interview on the occasion of the International Day Against Drug Abuse and Illicit Trafficking (HANI) 2019 in Jakarta, Tuesday (25/6).

Pramono added that this years HANI which adopts theme “Healthy, Drug-Free Millennials Towards Golden Indonesia” for Indonesia is fitting with the current main issue in our  society in which many millennials feel that they can be more productive if they use drugs. In fact, he added, the millennials can do something even much better without drugs.

Pramono also maintained that Indonesia must seriously declare war on drugs. “This is the duty of the Government, the Indonesian National Police, the National Narcotics Agency (BNN), and all layers of society, especially family,” he said.

The family, Pramono added, should also be the main pillar to keep the children away from drug abuse; otherwise, drug issue will become more severe before we know it and one will be aware of it only after their families are affected.

“We have to continue declaring war against drug abuse because it can pose as a major threat to the nation’s future, especially for our younger generation,” he said.

In his message to the millennials, Cabinet Secretary once again urged them to stay away from drugs because it will not bring any benefits for them and drug users should not be proud of themselves, adding that drug abuse has nothing to do with vitality or energy, contrary to what some people assume.

“Drug abuse has now become a common enemy and we must join hands to fight it. This nation’s future will be better if we, particularly the millennials, stay away from drug abuse,” he said. (RSF/RAH/ES)