Dualism in Authority and Management of BBK Free Trade Zone Should Be Settled: President Jokowi 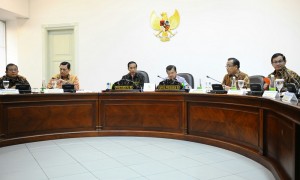 President Joko Jokowi Widodo said that dualism in the authority and the management between Batam regional government and Batam Industrial Development Authority (BP Batam) should be settled as it could bring impacts to legal certainty for investors, provision of infrastructures, delay in the issuance of permits, and matters related to workforce.

I want those problems to be addressed, said President Jokowi in his opening remarks before a limited meeting on Batam, Bintan, and Karimun (BKK) Free Trade Zone at Presidential Office, Jakarta on Tuesday (19/1).

At the meeting, the President also reminded that it is now the era of competition; thus breakthrough measures are needed to revitalize a number of Special Economic Zones (KEK) in Indonesia, both the ones in Batam, Bintan, and Karimun and in other regions.

All Special Economic Zones must have their own attractiveness, competitiveness, and edge the President said.

Therefore, President Jokowi said that the Government must make bold moves to address problems and to overcome the barriers that make it difficult for those KEK to be built and developed well.