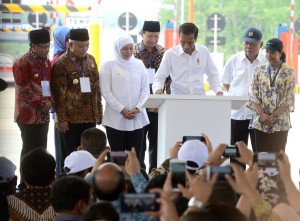 Governor of East Java Khofifah Indar Parawansa expressed hope that the newly-inaugurated section 1, 2, and 3 of Pandaan- Malang toll road will ease traffic ahead of this years Eid Day.

She also thanked President Joko Jokowi Jokowi for inaugurating the sections, which have been scheduled to be operated during this years mudik (annual exodus ahead of Eid Day).

Vehicles from Surabaya, Pandaan, and Purwosari have so far significantly contributed to traffic congestion. In a regular two-way traffic, there are at least 65,000 vehicles crossing the road from Surabaya to Malang per day and they must pass through congestion-prone spots in Lawang and Singosari, Khofifah said when accompanying President Joko Jokowi Widodo during the inauguration at the Singosati Toll Gate, East Java, Monday (13/5).

The Governor added that the operation of Pandaan-Malang Toll Road is expected to reduce the traffic density by 70 percent as 45,000 vehicles will use the toll road, adding that the toll road would also  accelerate mobility of the people, goods and services, as well as improve accessibility.

We hope after the operation of that toll road section 1, 2, 3 spanning 30.63 km, the completion of section 4 and 5 will be accelerated, Khofifah said, adding that sections 4 and 5 are expected to attract 7.2 million tourists to visit the city of Batu, one of the provinces favorite tourist destinations.

The Governor also expressed hope that Abdulrachman Saleh Airport in Batus neighboring city of Malang   which has been designated to be an international airport – can also accommodate more tourists.

She also expressed hope that the city of Malang, Malang regency, and the city of Batu as the so-called Golden Triangle of Great Malang can become a center of substantial economic growth in the province. (DNA/RAH/ES)