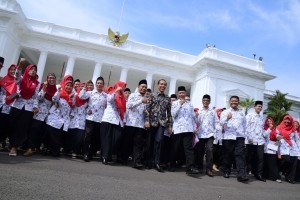 Teachers play a pivotal role in educating the young generation, given that education is the key to develop a nation, President Joko Jokowi Widodo has said.

Only a nation that is educated and smart, that has morals, and that develops science and technology will become a developed, prosperous nation, the President said during a meeting with the Indonesian Teachers Association (PGSI) at the State Palace, Jakarta, Friday (11/1).

The President also expressed deepest appreciation to the teachers dedication and sacrifice in patiently educating the Indonesias young generation.

Regarding teachers certification, the President said he would first learn the issue thoroughly and coordinate with Minister of the Empowerment of Civil Apparatus and Bureaucratic Reforms, Minister of Education, and other related ministers including Minister of Religious Affairs.

I ensure you that the Government is committed to improving the teachers welfare in the country. We will do our utmost to seek a solution to this problem, the President said, while expressing his concern that there are teachers who still receive a salary of only Rp300,000  Rp 500,000 per month.