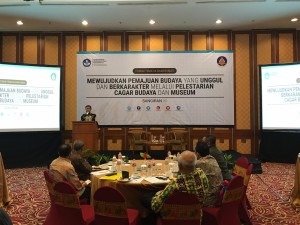 Of 435 museums across the country, 100 of them are in poor conditions and have low visitor numbers, Ministry of Education and Culture has announced.

“There are around one hundred museums categorized as improper in accommodating historical collections, with some of them were even shut down because they lack operational funds, said the Ministrys Director of Cultural Heritage Preservation and Museum Fitra Arda Ambas on Wednesday (19/6).

According to him, there are few reasons why a museum no longer serves as public space, namely institutional change, being forced to raise funds, data inaccuracies in the collections information, human resources incompetence, budget limitations, and inefficient programs.

“Unfortunately, museums are commonly used only as storage places, not for preserving historical objects and the stories behind them, Fitra added.

Fitra added that museum management is not a priority program for the regional governments. He also compared with the museums managed by private sectors, such as Museum of Bank Mandiri and Museum of Bank Indonesia, which are well-managed.

Fitra also suggested some steps to revitalize museums so they can serve as they supposed to. According to him, museums should display historical collections based on public interests so that they can boost market segmentation, promotion, and aesthetic as well as scientific values without interfering the museum’s main function as a preserver.

In addition, Fitra added, museum managers should also display the museums most valuable collections to be presented to the public. In addition, museum managers are also expected to revitalize management system to be more adaptive to the changing times as well as suitable with creative economy and tourism industry.

“Museum managers are required to be able to design programs and public activities that are creative, fun and educational,” Fitra said. (SLN / MIT / ES)