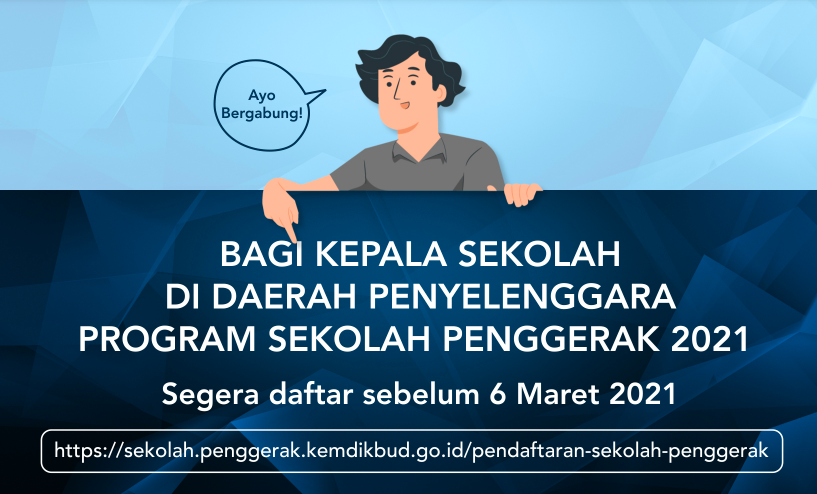 Nadiem asserted that this program is a catalyst to manifest the visions of Indonesia’s educational reforms which focused on developing students’ learning outcomes holistically to become students who uphold the principle of Pancasila (the Five Principles, Indonesian State Ideology).

“The program is set up to realize an advanced and self-reliant Indonesia through religious, righteous, independent, creative, cooperative, and competent students who uphold the values of Pancasila,” he said.

In general, the program is focused on human resources development at school environment including students, teachers, and headmasters. Students’ quality is assessed from their learning outcomes by creating a safe, comfortable, inclusive, and fun learning environment.

In the meantime, Secretary General of Ministry of Home Affairs, Muhammad Hudori, affirmed support from the Ministry for the program through four measures.

First, the Ministry called on regional governments to fully understand the transformational schools program. Second, regional governments are ordered to draw up regional policies as a follow-up action by taking into account norms, standards, procedures, and criteria set by the Ministry of Education and Culture. Third, related educational offices must map the necessities required to support the implementation of the program. Last, job rotation for headmasters, teachers, and other human resources working in public schools that participate in this program must be postponed for at least four years.

“It requires collaboration, fostering, and monitoring from the Central Government, regional governments, and provincial/municipalities governments,” he said.

On that occasion, Chairperson of Commission X of the House of Representatives, Syaiful Huda, told that the House applauded transformational schools program which is considered as part of the implementation of “Merdeka Belajar” (Freedom to Learn) Educational Road Map and as an effort to accelerate educational reforms.

The program is also aimed at improving the quality of schools and responding to the issue of favorite schools.

This program is not developed to create gap between schools, Huda further stated. Thus, the House will monitor its implementation. A team involving all layers of society will be formed so the objectives of the program can be understood by all sides. In addition, a new regulation will be drawn up to speed up the implementation, particularly during the pandemic. (MINISTRY OF EDUCATION AND CULTURE/UN) (RAS/MMB)