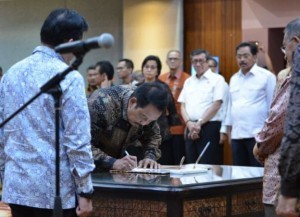 On that occasion, Darmin Nasution said that Edy Putra Irawady will serve as Head of BP Batam during the transition period, before the position is held ex-officio by the Mayor of Batam, in accordance with the minutes of Limited Cabinet Meeting on 12 December 2018.

“The inauguration of Head and officials of BP Batam is in the context of synchronizing and coordinating the implementation of BP Batam’s management and development responsibilities during the transition period,” Darmin said, adding that the appointment will end dualism in Batam Authority and ease investment and business licensing process in Batam.

The task of the Head of BP Batam in the transition period is to prepare a report on the transfer of ex-officio position, prepare technical regulations for the implementation of ex officio position, and carry out routine tasks, not making policy, Darmin said.

“Edy Putra Irawady shall be able to run several BP Batam plans that have been decided before,” Darmin said.

Regarding the appointment of Mayor of Batam as an ex-officio Head of BP Batam, Darmin said that its legal aspect has been reviewed and the policy does not violate the provisions of Law.

According to Darmin, there are two things needed for the implementation of the policy: drafting Government Regulation (PP) and its implementation transition.

Darmin further said that second amendment of Government Regulation Number 46 of 2007 is currently underway. In drafting the regulation, substantial input from various business actors, the Chamber of Commerce and Industry (KADIN), and elements of society has been heard.