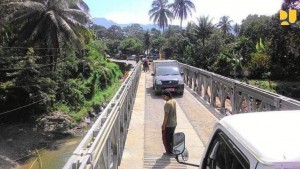 The emergency bridge in Padang Pariaman that connects Padang and Bukittinggi is ready on Sunday (16/12). Photo by: Ministry of Public Works and Public Housing.

“Minister of Public Works and Public Housing Basuki Hadimuljono has set the target that the emergency bridge must be ready on Saturday (15/12). However, due to heavy rains, we were forced to stop working for 8 hours because the water level of the Batang Kalu River rose,” Directorate General of Road Development Aidil Fikri said during the opening of the bridge.

Aidil explained that the emergency bridge has a length of 36 meters with 12 steel panels and can only provide one-way traffic from Padang to Bukittinggi, while vehicles from Bukittinggi to Padang are diverted to Sicincin Melalak road.

“Construction of the bridge is estimated to cost around Rp.15 billion and takes 6 months. The bridge has a length of 36 meters and will use a bore pile construction. The bridge is supposed to last 100 years,” Aidil explained.

Aidil went on to say that Ministry of Public Works and Public Housing through the River Basin Agency (BWS) of Sumatera is also working on the building for Batang Kalu River management, while the embankment construction of the river is expected to be completed in February 2019. (BKP Kementerian PUPR/ES)