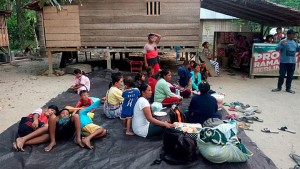 Head of Information Data Center and Public Relations of the BNPB, Sutopo Purwo Nugroho in his press release on Friday (28/9) said that the tsunami and the quake caused deaths.

“Based on temporary report, there were several victims who died because they were hit by the debris of collapsed buildings,” Sutopo said, adding that the tsunami had also hit several settlements and buildings on the beach. He asserted that the number of victims and the scale of damage caused by the quake have not yet been confirmed.

According to Sutopo, BPBD, the Indonesian National Defense Forces (TNI), the Police, the National Search and Rescue Agency (Basarnas), the Regional Working Unit (SKPD) and volunteers are currently evacuating and helping victims. He added that the injured victims were handled by health workers and emergency response is underway.

Sutopo further said that power outage caused the communication network in Donggala and its surrounding areas to be unable to operate because electricity supply from the state-owned electricity company PLN was disrupted.

There are 276 base stations that cannot be used,” Sutopo said, adding that communication operators continue to try to restore emergency electricity supply, while Ministry of Communication and Information has taken steps to recover the communication.

Sutopo went on to say that head of the BNPB Willem Rampangiley and BNPB officials headed to Palu on Friday (28/9) through Makassar and then flew to Palu and Donggala City using helicopters.

According to Sutopo, the failure of communication causes difficulties in coordination with disaster-affected areas. Sutopo added that the power outages also caused complete darkness in Palu and Donggala, while the aftershock regularly occurs.  (Humas BNPB/ES) (RI/EP/Naster)