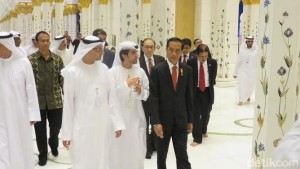 Jokowi President who arrived in this mosque at 22:10 pm Local Time or 1:10 pm directly entered the mosque and surrounds a small part of the mosque, while listening to the Imam of the mosque

This mosque possesses the beauty and splendor exceptional, other than, the around of the mosque there is also a pool which has an area of 7,800 m2. Lighting mosque even this gives a distinct impression, because it reflects the color of bluish gray.

“The capacity is very large and also the architecture is very good,” said President Jokowi praise.