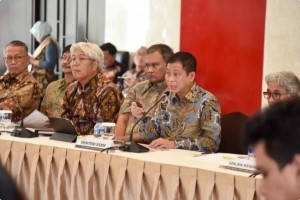 The dynamics of the global economy in 2018, particularly rising oil prices, have become a windfall for investment in Energy and Mineral Recourses sector.

Jonan also said that the higher investment was supported by the increase of Indonesian Crude Oil (ICP) from the beginning of January to October 2018. In October 2018, the ICP price reached US$ 77.5 per barrel before decreased to US$ 62.9 per barrel in the following month. This condition also affected investment in oil and gas sector in 2018 with a value of US$ 12.5 billion, followed by mining (US$11.3 billion), electricity (USS 6.8 billion) and renewable energy (USD 1.6 billion), he said.

Jonan went on to say that the Government has implemented appropriate policy mitigation so that the global economic turmoil that suppresses world oil prices does not affect people’s purchasing power. The Government is also committed to ensuring that electricity tariff and fuel price affordable until the end of 2019.

“What is important is that the Government is committed to maintain the electricity tariff, which is evaluated every three months. We hope that until the end of the year there will be no change in the tariff. In addition, as of today the Government does not see any reasons for increasing price of premium or gasoline 88, and C48 gasoil,” Jonan said.

Jonan also said that the investment target in Energy and Mineral Resources sector in 2019 is set at US$ 33.34 billion, lower than that of 2018 with US$ 37.2 billion, considering the pressure of world oil prices in the past two months, due to abundance of world crude oil production.

The oil price is also affected by market worries over weakening global economy due to escalation of trade wars between the United States (US) and China, as well as Brexit uncertainty that could weigh on the European economy.

For Asia Pacific region, the decline in crude oil prices is influenced by the following factors:

The changes of average crude oil prices on international market in December 2018 compared to that of November 2018 are as follows: