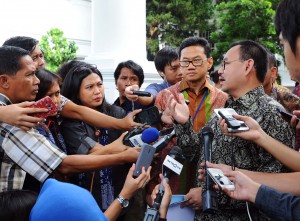 Minister of Energy and Mineral Resources (ESDM) Sudirman Said explained that there is a contract to procure 17,340 Mega Watt (MW) of electricity in the target to provide 35,000 MW until the end of the year.

It is the target that we must be grateful for. Obviously, we have to review it one by one. However, we must be grateful that the investors have high interest. Now, the task is to implement the contract, Sudirman said to the reporters after attending a meeting with President Joko Jokowi Widodo and 150 power plant investors, at the State Palace, Jakarta, on Tuesday (22/12) afternoon.

According to Sudirman, in the meeting, President Jokowi asked the details of the progress of each projects and it indicates the Presidents concerns and he does not only take good reports.

Thus, we have tools to monitor it, the Minister said.

Regarding the tariff, Sudirman explained that there will be agreements as the implication of new standard tariff set by the State-Owned Electricity Company (PLN).

There will be agreements between the developers and State-Owned Electricity Company (PLN). It is expected about 10,000 agreements, Sudirman said.

Teten also said that in the predicted economic development, the demand for electricity is 1.5 percent. Therefore, the amount of 35,000 MW is a form of Governments anticipation to face electricity crisis in 2019, he added.

I think the Presidents commitment is clear, that is to simplify permits and it has been implemented through 1st-8th economic packages and it has been followed up. Regarding land issue, there are several alternative ways, Teten added. (DID/JAY/ES) (RAS/EP/YM/Naster)