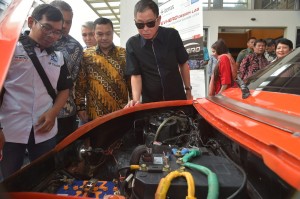 In a bid to boost development of electric vehicle (EV), the Government is committed to issuing relevant regulations and providing infrastructure, Minister of Energy and Mineral Resources Ignasius Jonan has said.

“We are waiting for the Presidential Regulation that will set the direction of electric vehicle in the country, luxury tax (PPnBM), import duty, local content, and assembling models,” Jonan said on the sidelines of the inauguration of Grati steamed-fuel power plant (PLTU) in Pasuruan Regency, East Java, Friday (26/7).

Jonan went on to say that while waiting for the regulation, his ministry is preparing infrastructure that supports the use of electric vehicles such as public electric charging stations (SPLUs). He also said he had asked stated-owned electric company PLN to provide SPLUs in public places such as malls, markets, office buildings or parking areas.

Jonan expressed optimism that the use of electric vehicles will show a positive trend in the country, particularly after receiving supports from other sectors apart from energy sector such as industries and financial sector and based on high global demand for electric vehicles.

The Minister further said that electric vehicles would bring positive impacts on energy sector as well as reduce fuel imports and air pollution.

In the meantime, acting President Director of PLN Djoko Abumanan said that PLN thus far has installed 3,600 SPLUs, adding that the company has also devised strategies to attract the public to use electric vehicles.