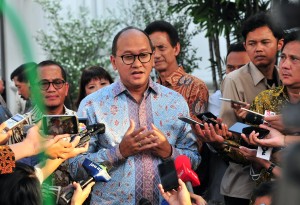 Chairman of Indonesian Chamber of Commerce and Industry (Kadin) Rosan P. Roeslani responds to reporters questions after a meeting with President Jokowi, at the Merdeka Palace, Jakarta, Wednesday (12/6). (Photo by: Jay/PR)

After Indonesia has successfully hold a democratic fiesta namely the 2019 Simultaneous Elections, entrepreneurs joining in the Indonesian Chamber of Commerce and Industry (Kadin) and the Indonesian Young Entrepreneurs Association (HIPMI) expressed hope that everything goes back to normal, orderly, and peaceful conditions and far from anarchy.

Because peaceful, orderly, secure, and harmonious condition is the main factor to run the economy, Chairman of Kadin Rosan P. Roeslani told reporters after being received by President Joko Jokowi Widodo with other Kadins and HIPMIs managements, at the Merdeka Palace, Jakarta, Wednesday (12/6).

During the meeting with President Jokowi, the Kadin and HIPMI, as representatives of Indonesian entrepreneurs, gave three inputs to the Government. First, regarding Indonesian Migrant Workers (TKI) in which 3.6 million of TKI sent approximately US$11 billion back to Indonesia in remittances. The figure is relatively small comparing to remittances of the Philippines, amounting to US$33 billion from 3.5 million migrant workers.

The huge difference is due to lack of language skills, nursing skills, and others. Thus, we hope it can be improved through vocational program which is implemented under President Jokowis Administration. If the remittances increase by US$10 billion, it can cut Indonesias current account deficit (CAD) by US$30 billion, Rosan added.

Second, the Chairman added, regarding the promotion of the countrys tourist destinations to attract more tourists. He said that around 15.5 million tourists visited Indonesia and generated US$17 billion of foreign exchange or approximately US$1,100 per tourist. The figure is relatively small comparing to other Asian countries, particularly Thailand which generated US$62 billion of foreign exchange from 38 million tourists.

Average spending and stay of tourists in Thailand is higher than Indonesia which is affected by its maritime policy. We already delivered this matter to the President, Rosan firmly said.

The last input is regarding textile industry in which the revenue increases by 25 to 30 percent this year. Therefore, we need to support policies and seize this momentum.

In addition, there must be structural and sectoral reforms in industrialization, for example by improving access to banking, and increasing opportunity and incentives, since relying only on fiscal and monetary policies is not enough to increase economic growth to be above 5 percent.

I have great expectation that the reforms can make the most of demographic bonus that is projected to end in 2040, he said.

The Chairman went on to say that in addition to discussing inputs for short term, the Kadin and HIPMI also raised inputs for medium and long terms, namely tax reforms to compete with our neighboring countries. Indonesias productivity is indeed still low compared to neighboring countries, but the Government strives to accelerate tax reform from the deduction of Income Tax (PPH), which is aimed to be at 17 to 18 percent from the previous 25 percent.

We hope the inputs can be implemented immediately, Rosan added. (FID/JAY/ES)