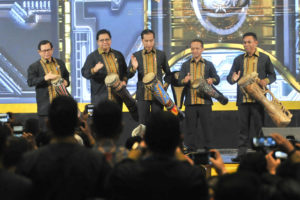 Given the number of Indonesian to enter the middle class and affluent consumer (MAC) demographic is projected to double from 70 million in 2013 to 141 million next year, President Joko “Jokowi” Widodo urged entrepreneurs joining the Indonesian Young Entrepreneurs Association (HIPMI) to anticipate it.

“This high figure shows “consumer revolution” in Indonesia,” President Jokowi said in his remarks during the opening of the 16th HIPMI’s National Meeting, at Hilton Hotel, Jakarta, Monday (16/9).

In addition to the increase of MAC population, the President added, demographic distribution of MACs would also spread more evenly from 25 regencies and cities in 2013 to around 54 cities and regencies next year.

“This condition will make Indonesia more attractive for business and investment. Nevertheless, we cannot let other countries benefit from us in this age of trade war and recession,” President Jokowi said adding that the entrepreneurs must seize this opportunity.

President Jokowi went on to say that the Government will continue its programs to removing investment barriers that will allow the country to become investment magnet during “consumer revolution” next year.

“I hope we can overpower other countries because not all countries have great number of consumers like us,” the Head of State added.

Also on that occasion, President Jokowi encouraged all entrepreneurs to make partners in business because there would be more opportunities for investment next year.

However, we are only half way through, thus the country must carry out mindset revolution through strengthening industrialization, downstream industry, and economic competitiveness in an effort to make the best use of the “consumer revolution”.

President Jokowi asserted that after the inauguration of members of the House of Representatives (DPR) of the next administration, the Government will propose 74 law revisions to accelerate Indonesia’s competitiveness.

“We will also propose for acceleration of economic competitiveness through omnibus law scheme,” the President concluded. (FID/JAY/ES)