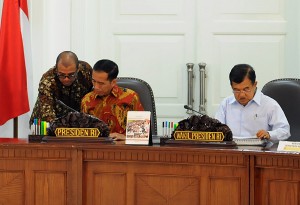 President Jokowi lead the Limited Cabinet Meeting to discuss the handling of Sinabung evacuees in the Presidential Office, Jakarta, Thursday (2/7)

President Joko Widodo (Jokowi) said that, although it has been more than five (5) years of the government dealing with the impact of the eruption of Mount Sinabung in Karo, North Sumatra, but the information received from the Centre for Volcanology and Disaster Mitigation eruption will continue for about 5 (five) years, although not on a large scale.

Therefore, the president said Jokowi, needed a new pattern in the handling of this matter, so that the affected population Sinabung eruption really feel the problem can be resolved.

“I’ve sent several teams there, we hear from the field is now the community is no longer willing to accept the visit, because a lot of the visit, but do not solve the problem, so it’s useless,” said President Jokowi when giving introduction in a limited cabinet meeting at the Presidential Office, Jakarta, Thursday (2/7) afternoon.

The President recognized that the last time he had to Sinabung, the matters related to the relocation of land has been executed. Even the construction of houses for the displaced of Sinabung, according to the planned 370 and has successfully completed about 130. However, he considered, for handling permanently in resolving the Sinabung refugees problem had not been resolved.

President Jokowi hopes, by the time he is returning to Sinabung, permanently solving problems that have been found. “If unresolved, only bring relief, I think Minister of Social Affairs able to do that,” he concluded.

The limited meeting that addressed the issue of handling of the affected population of Mount Sinabung eruption was attended by Minister of Social Affairs Khofifah Indar Parawansa, Minister of State Secretary Pratikno, Cabinet Secretary Andi Widjajanto, Chief of Staff of President Luhut B. Pandjaitan, Minister of Environment and Forestry Siti Nurbaya, Minister of Public Works and of Public Housing Basuki Hadimuljono, Minister of Education and Culture Anies Baswedan, Minister of Research and Higher Education M. Nasir, and Regent of Karo Terkelin Brahmin. (DID/HH/ES)