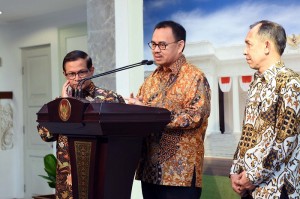 In the limited meeting chaired by President Joko Jokowi Widodo and attended by vice president Jusuf Kalla and a number of Working Cabinet Ministers, on Monday afternoon (1/2), Minister of Energy and Mineral Resources (ESDM) Sudirman Said stated that all arguments concerning the management scheme of Masela gas block, either suppporting the offshore scheme or the onshore scheme, had been openly stated without any pretension.

We have agreed that President will take the best decision for our nation, for regional development and economic growth, said Sudirman to the press after the meeting.

According to ESDM Minister, President said that whatever option will be taken, the main concern is how the existence of Masela Project will be beneficial to the local economic growth.

Therefore, the next step, President will invite Inpex and Shell, and then a final decision might be made in the near future. replied Sudirman.

Meanwhile, Governor of Maluku Said Assagaff appreciated the meeting chaired by President Jokowi since it asked for the opinion of local government on Masela Block.

The important thing for us is our people. The development in the upcoming years related to the Masela Islands gas management will bring prosperity to Maluku people. I would like to express my gratitude to be able to learn different opinions and those will be very valuable inputs, said the Governor while affirming his trust that Presidents decision will be well accepted by all sides since it is for the sake of the people. (FID/UN/ES) (AJ/LW)