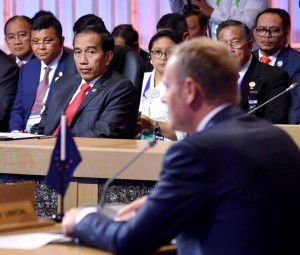 Discrimination against palm oil in the European Union (EU) countries must be ended and measures and policies considered detrimental to the economy and images of palm oil producing countries must also be eliminated.

The statement was made by President Joko Jokowi Widodo at the Association of Southeast Asian Nations (ASEAN)-EU Commemorative Summit on the 40th Anniversary of the ASEAN-EU Dialogue Relations at the Philippines International Convention Center (PICC), Manila, the Philippines, Tuesday (14/11).

President Jokowi asserted that palm oil (production) is really related to the efforts to alleviate poverty, to reduce development gap, and to support inclusive economic development. The President added in Indonesia alone, that there are currently 17 million Indonesian whose jobs are related to palm oil sector and as many as 42 percent of palm plantation is owned by small-sized farmers. Therefore, the President urged the EU to immediately end discrimination against palm oil.

Several moves and policies considered detrimental to economic interests and the ones that can jeopardize the image of palm oil producing countries must also be eliminated, the President said.

According to the President, resolution adopted by the EU Parliament and several European countries on palm oil and  deforestation, as well as black campaigns related to the issues, do not only harm economic interests but also damage image of palm producing countries.

President Jokowi further said that Indonesia is aware of the importance of sustainability and said that the Indonesian Government has adopted several policies on sustainability, including on the implementation of Indonesia Sustainable Palm Oil certification (ISPO).

In the meantime, at the ASEANCanada 40th Anniversary Commemorative Summit President Jokowi conveyed Indonesias full support to the effort in establishing ASEANCanada Free Trade Area. However, the President also expressed his concern about growing protectionist agenda through the implementation of tariff and non-tariff barriers in developed countries.

Therefore, President Jokowi considered that that ASEAN and Canada should send a strong message to the world that openness in inclusive economy will bring benefits to the peoples of the two sides. The President also stressed the importance of ASEAN-Canada partnership to develop an inclusive economy that will benefit both sides.

We will capitalize on this momentum of the 40th anniversary to enhance mutually beneficial cooperation, President Jokowi concluded. (SM/ES/EN)(RAS/EP/YM/Naster)