Everyone Equal Before the Law, President Jokowi Says 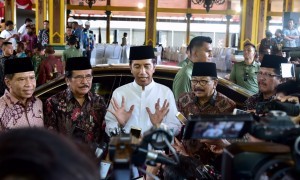 Anyone involved in a legal case must be brought to justice because all citizens are equal before the law, according to President Joko Jokowi Widodo.

Everyone is equal before the law, the President said after distributing land certificates to residents in Bangkalan Regency at the Pendopo 2 of the Office of Bangkalan Regent, on Wednesday (19/12).

If there is a legal case, do not define it as criminalization. You should not think that way because every legal case must be settled at the court, the President firmly said.