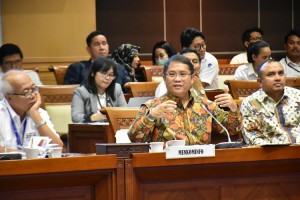 Facebook is a social media platform that is least compliant in fulfilling the Governments requests to block hoax content on social media, Indonesian Minister of Communication and Informatics Rudiantara has said.

We will reveal the data how much we ask (the platforms) to take down and to some extent they take down, Rudiantara said in the Working Meeting of the House of Representatives (DPR) Commission I with Ministry of Communication and Informatics in Jakarta, Monday (13/5).

The statement was conveyed by the Minister in response to a statement made by the DPR Commission I member Evita Nursanty that Facebook would obey the Government’s request to block hoaxes.

The Ministry, Rudiantara continued, is ready to show data on the number of blocking requests from the Government to social media platforms in Indonesia.

We have all the records, he said, adding that the Ministry had been and would always be bold in blocking negative contents.

According to Rudiantara, the disapproved blocking request for contents considered infringing is deemed not in accordance with Facebook’s rules. However, Ministry of Communication and Informatics must first argue with Facebook so the demands are met, he said

What Facebook says to you (DPR Commission I members) is indeed different from the reality, Rudiantara said. (Humas Kominfo/ES)