Facing the AEC, BNSP Will Increase the Professional Certification Program 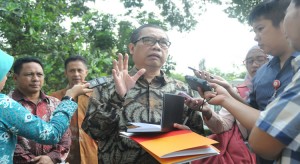 The Professional Certification National Board (BNSP) plans to expand professional certification programs to strengthen human resources in the country in the era of global markets in the ASEAN Economic Community (AEC), in early 2016.

Related to the efforts Head of BNSP, Sumarna F. Abudurahman, meets President Joko Widodo (Jokowi), in the office of President, Jakarta, Monday (8/6) morning, to get support for the strengthening of the tasks and functions of BNSP.

“We reported to the President that due to the duties and functions of BNSP that is greater in the future, then we ask for the Presidents support to improve the institutional capacity. During this time in terms of budgeting we follow the budget system of the Ministry of Manpower, so we could not many opportunities in developing the program,” said Sumarna told reporters after received by President Jokowi.

According to Sumarna, President Jokowi support what is done by BNSP to make the other countries taking into account, and expressed with the low quality of education our workers are still more than 50% educated of downward elementary school, then the certification of competence becomes important.

“He stated that in the future will encourage the development of vocational education, both polytechnic and vocational school. Instead to improve the quality of vocational he said it would set up Vocational Instruction,” Sumarna said.

Head of BNSP Sumarna F. Abdurahman said that from the 12 priority sectors only one has reported to the President Jokowi, that relative competence of certification infrastructure has been recognized in the ASEAN, namely tourism. While the other strategic sectors, particularly the sector of products, ranging from agro, wood, that supposedly great potential, in fact, for certification infrastructure of human resources preparation was relatively not built yet.

Sumarna explained that BNSP already started by way of a breakthrough adopt competency standards from the outside, such as Australia, as currently in ASEAN the direction inclined to Australia.

“The Autralia has issued an official letter from the department of education and training, that BNSP allowed to adopt competency standards for 12 priority sectors of ASEAN,” said Sumarna as he mentioned, from 12 sectors, 7 will be in the product sectors: agro, rubber, wood, etc., 5 in the services sectors, namely logistics, health, tourism, air transportation, and communication and information.

Head of BNSP assess, Indonesia is already late when compared with other countries, for example in the tourism sector. Currently in the Philippines, there are already as many as 600 thousand workers with the ASEAN certified for tourism. While Indonesia on 7 April, just give a certificate premiere as many as 400 people in Denpasar. “We do test for the hospitality workers in Bali, with the ASEAN standards,” he said.

As for the 11 other sectors, further Sumarna, will be efforts to accelerate in 2015 with the adoption. Thus, it is expected by the end of this year there will be 120 thousand workers in 12 sectors with the ASEAN certified. “Hopefully this can be achieved because our budget is already liquefied 1 June ago,” Sumarna said. (Humas Setkab/ES)