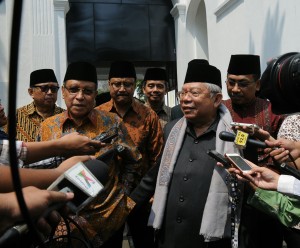 President Joko Widodo (Jokowi) expressed, that the country in a state of considerable concern because of global influences, global economy. Therefore, it is necessary that efforts be made more intensive and the need for patience in the face.

We must remain optimistic. Insya Allah, the government will endeavor, a month or two, soon to be completed,” Chairman of the NU Said Aqil Siraj said, after together with the committee of PBNU congress period 2015-2020 reported the results of PBNU congress in Jombang, East Java, to the President Jokowi, in the Presidential Palace , Jakarta, Thursday (27/8) morning.

Earlier, Rais Syuriah NU KH. Ma’ruf Amin said that the arrival of NU administrators to stay in touch with President Jokowi intended to convey gratitude to the President who has opened the NU Congress in Jombang.

Moreover, in the meeting also reported the results that achieved in the NU Congress in Jombang. PBNU also expressed its readiness to undertake a partnership with the government, with the state, jointly to overcome the various challenges, both in nature ideologies distorted, streams deviant, radicalism of various groups, or in overcoming economic problems that facing the country.