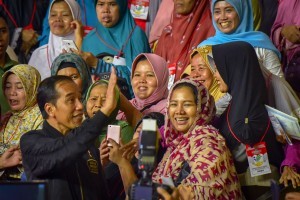 The Indonesian Government decided to speed up the distribution of the Family Hope Program (PKH) funds in 2019. Usually the funds are disbursed in February, May, August and November, but next year the disbursement will  take place in January, April, July and October. In addition to that, according to President Joko Jokowi Widodo, the amount will be doubled.

The most important thing is the amount will increase twofold next year, from originally Rp 1,890,000, said President Jokowi while attending the dissemination of 2019 Family Hope Program (PKH), at  East Jakarta Sports Hall, Jakarta, Monday (3/12).

Minister of Social Affairs Agus Gumiwang Kartasasmita in his report said that the distribution of PKH funds nationally until 30 November 2018 had reached 96%.

In accordance with the Presidents instructions, continued the Minister, PKH funds in 2019 will be increased significantly from Rp 19.3 trillion to Rp 32.65 trillion. He added that the increase is in line with the rise of social assistance index on health, education and social welfare aspects.

The Government is expected to reduce the poverty rate at around 8.5 to 9.5 percent in 2019, Agus concluded. (FID/AGG/ES)