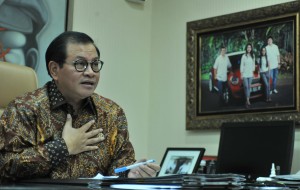 Cabinet Secretary speaks during an interview at his office at Building III of the Ministry of State Secretariat, Jakarta, Tuesday (29/6). (Photo by: Rahmat/PR)

Cabinet Secretary on the 2019 National Family Day (Harganas) has said that family role is important in preventing early teen marriage in Indonesia.

“Many parents allow their children who are below marriage age, especially the girls, to get married. In terms of easing the familys poverty, it often becomes the reason for the parents for marrying off their children early. That should not happen again,” Pramono said at his office at Building III of the Ministry of State Secretariat, Jakarta, Tuesday (29/6).

Pramono further said that it is important to educate young people, their parents, and related institutions in hopes of preventing them from entering into marriage too young.

“Getting married at a very young age is not a good choice, therefore, only marry when you are well-prepared morally, economically, as well as psychologically,” he added.

According to him, the married children do not aware of their responsibility or protection for their marriages. They will live a languish life and suffer when they get a divorce. This issue becomes a burden for society and also for the Government. In this case, the Government must be consistent in implementing early marriage legislation.

“The Government must implement the existing laws consistently. The law is very clear on this,” he said.

On that occasion, Cabinet Secretary said that the Government officials who help the early marriage process will be severely punished for breaking the laws.

“The Government should educate related officers, the children, and also their parents who carry out the early marriages,” he said. (RSF/RAH/ES)