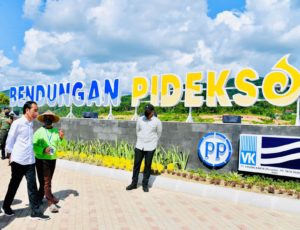 President Jokowi is having a dialogue with farmers after the inauguration of Pidekso Dam in Wonogiri, on Tuesday (12/28). (Photo by: Bureau of Press, Media, and Information of Presidential Secretariat/Laily Rachev)

Following the inauguration of Pidekso Dam in Wonogiri Regency, Central Java province by President Joko “Jokowi” Widodo, on Tuesday (12/28), a number of farmers expressed their hopes upon the construction of the 232-hectare dam.

One of the farmers from Kebunharjo village, Surahmin, felt grateful upon the construction of Pidekso Dam. Surahmin said that the dam will bring enormous benefits and welfare for the people.

“We are grateful and insya Allah it will bring benefits for the people. We used to harvest one or two times a year, insyaAllah next time we will harvest three or four times a year,” Surahmin said.

Surahmin also expressed hope that Pidekso Dam will bring benefits to the irrigation, so farmers’ productivity will increase. To date, Surahmin continued, the farmers can produce about 6-7 tons for one hectare in the village.

“We hope that if we can harvest three times a year, we may increase our production,” he added.

Another farmer from Balepanjang village, Trianto, also echoed the same response and expressed hope that with the construction of the dam, local production of foodstuffs will grow higher.

“According to my experience, before Pidekso dam was built, we could only harvest once a year. Hopefully, later we can harvest two or three times a year after Pidekso dam is built,” Trianto said.

Moreover, the farmers requested that the Government pay attention to the tertiery irrigation of Pidekso dam. Mariyono, a farmer from Ngancar village expressed hope that the irrigation of this dam can be on target.

“In the future, if one day the irrigation channel reaches my area, please consider that the tertiary irrigation is not working well, so I think the irrigation will probably not be on target,” Mariyono said. (Bureau of Press, Media, and Information of Presidential Secretariat/UN)(AW/MUR)