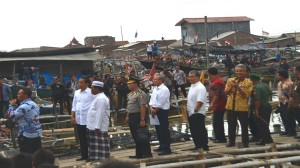 President Joko Widodo (Jokowi) was sad when he visited the widest fisherman village in Semarang, on Tuesday afternoon.

Why dont our fishermen control the capital? Not being the lord on their own sea, in their own country? Whereas we have the wide sea and a lot of fishes, Jokowi said it as written in his facebook fan page a few moments ago.

According to the President, this illegal fishing has large impacts. One of the impacts is our fishermen are poor now.

President Jokowi understood Minister of Maritime and Fisheries Susi Pudjiastuti when she said that our fisherman have been poor because of the foreign trawl that took our fish arbitrarily.

It is obvious why Miss Susi was angry, her nationalism burned, her love to the people made her angry. Why our fishermen are poor while our  ocean has been completely robbed, Jokowi revealed.

President affirmed that we have to act. As a president who is also the highest Indonesian Military Commander, Jokowi admitted that he has ordered the security officers,Secure…secure, once again…secure our ocean from the ships of foreign fish looters, he affirmed.

According to the President, his step to secure our ocean from the ships of foreign looters is our first step to settle the mafia of fish thief in our ocean.

Based on the Financial Auditor Agency data, according to Jokowi, the loss because of the fish stealing in our ocean hit IDR 300 trillion, and there are 5.400 ships who conducted the illegal fishing.