Fiesta of Democracy Should Be Full of Joy, Happiness, President Jokowi Says 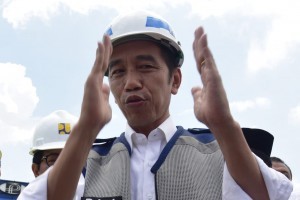 Politicians should refrain from doing politics of fear and political propaganda that will ignite fear and uncertainty among the people, according to President Joko Jokowi Widodo.

“This fiesta of democracy should be full of joy and happiness. The people should vote with their conscience and logic and we must improve our political maturity,” the President said, while urging the public to move from hate speech to telling the truth, from pessimism to optimism, and from conflict to harmony and unity.

Previously on Friday (9/11), when delivering 3,000 land certificates for residents of Tegal and its surrounding areas in Tegal, Central Java, the President said that many politicians today do not have good political ethics and manners.  They do politics with frightening propaganda and make people scared, President Jokowi said, adding that those politicians will create uncertainty in the society.

These methods are unethical political approaches. That is genderewo politics, the President added.

Genderuwo is part of Javanese mythology, which according to the official Indonesian dictionary is a ghost in muscular human form with thick hair all over the body.