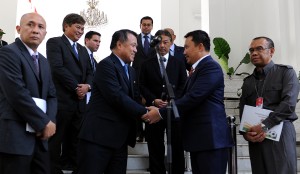 Minister of Youth and Sports, Imam Nahrawi together with delegation of FIFA and AFC, after received by President Jokowi, at the State Palace, Jakarta, Monday (2/11)

Minister of Youth and Sports Affairs (Menpora), Imam Nahrawi together with the Chief Staff of the President Teten Masduki, accompanying President Jokowi on that occasion said that the meeting took place in an atmosphere of intimate and constructive.

FIFA delegation that met with President Jokowi consisted of Kohzo Tashima of Japan and Prince Abdullah of Malaysia. While the AFC Executive Committee Mariano V. Araneta Jr. from the Philippines, who accompanied by the Director of the AFC, James Johnson, Sanjeevan Balasingam, and John Windsor.

Before meeting with President Jokowi, the delegation has met with the management of the Indonesian Football Association (PSSI) to discuss the FIFA sanctions, as well as how the lifting of the sanction. PSSI hope this meeting will be the starting point of Indonesian football enlightenment.

Furthermore, the FIFA delegation will meet with PT Liga Indonesia, as the operatives football competition, the Provincial Association representatives, media, and APPI (Association of Professional Football Players of Indonesia) on Tuesday (3/11). (ES)/Sy.