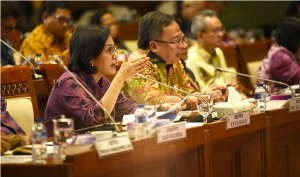 Minister of Finance Sri Mulyani Indrawati asserted that the Government continues to manage the debt prudently and accountably so that the countrys foreign debt remains at a safe level.

The Minister made the statement during a Working Meeting with the National Development Planning Agency (Bappenas), the Central Statistics Agency (BPS), Bank Indonesia (BI), and Financial Services Authorithy (OJK), hosted by the Commission XI of the House of Representatives (DPR), in Jakarta, Monday (17/6).

Policies in managing macroeconomy to develop national economy including a debt instrument are flexible. Once the economy is improved, the debt will be reduced and fiscal portion in the State Budget (APBN) can be increased, the Minister said.

Therefore, she added that debt must be considered as an instrument rather than an objective. In that case, the Government for example has been issuing government debt securities to the people in the country in order to expand investment market.

As more people opted to invest on the Government debt market, it can reduce volatility amid global economic turbulence.

The State Budget including finance and debt is an instrument. When the economy weakens, debt is used in a countercyclical manner against the weakening. Fiscal policies were designed not only as a stand-alone policy but as a part of macroeconomy management in order to materialize national development, Sri firmly said.

The Minister went on to say that the Government has been managing debt prudently in accordance with the provisions on Law Number 17 of 2003 on State Finances.

Provisions contained on Law Number 17 are very clear and we once again will continue to maintain debt based on the provisions of laws and regulations. The state budget deficit should be maintained below 3 percent and the maximum debt limit should not exceed 60 percent as stipulated in the laws. We now only use 30 percent based on hard limit system, the Minister said.

We manage the debt prudently. It can be reflected by debt interest risk that has decreased consistently since the country received investment grade. We also continue to reduce risk of foreign exchange to below 40 percent. In addition, the Governments debt due within 3 years remains stable until now, the Minister concluded. (Ministry of Finance PR/ES)