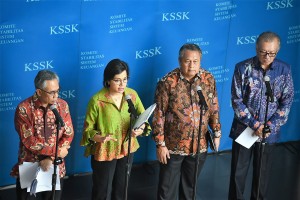 All aspects which are evaluated by the KSSK indicates that our financial system is normal and runs properly, the Minister told reporters after a KSSK regular meeting, at Juanda I Building, Ministry of Finances Complex, Jakarta, Tuesday (29/1).

We ended the 2018 fiscal year with great performance. The state revenue reached 102.5 percent of the  target, while tax and non-tax revenue increased by 16.5 and 30.8 percent respectively, the Minister added.

Therefore, the KSSK will continue to ensure that fiscal policies can run properly in order to maintain stability, improve distribution, and accelerate allocation so that the economic growth can be maintained and poverty eradication as well as peoples welfare can be improved.

According to the Minister, the Government is confident that national economy has been managed better than the previous period thanks to the rising  expenditure and lower state budget deficit.

Considering the State Budget deficit narrowed down by 1.76 percent of the GDP or lower than 2.19 percent as regulated in the 2018 State Budget Law, the KSSK is optimistic that they will be able to maintain national economic confidence amidst global turmoil.

Moreover, the Minister asserted that a sound and strong state budget can be indicated by its primary balance. In 2018, Indonesias primary balance significantly dropped compared to the previous year. This indicator showed that Indonesias financing function and deficit financing is managed well.

We can also notice a sound and strong state budget from the primary balance, in which in our case has reached minus Rp1.8 trillion in 2018, or dropped significantly compared to the figure last year which was Rp124.4 trillion. It indicates a sound state budget, Sri Mulyani explained.

With the description of the 2018 performance, the Minister of Finance ensures that the Government together with all relevant stakeholders such as BI, OJK and LPS will continue to synergize and cooperate in maintaining the stability of Indonesias financial sector and economy in 2019. (Ministry of Finances PR Division/ES)